“The generous spirit of zucchini challenges us to get out of the “zucchini bread” box and try some new recipes.”

I have a very strange relationship with zucchini. No matter what I do I seemed to be plagued with the beast. It has been such an invasive species in my garden over the last few years that I made the landmark decision not to plant ANY zucchini this year. Instead I was going to plant some lovely winter squash that I had lovingly saved the seeds for.

Now I must make note here that I had also begrudgingly saved the seeds from my zucchini too. (You can see it coming huh?) I planted those winter squash seeds and nursed them up and tucked them in the garden in a place of honor. Low and behold the first blossom came. Then the first squash started to form and…. Drumroll… it was a zucchini! What?? Obviously the seeds had been mislabeled. Yes, I’m being conspired against by the zucchini gremlins. And yes, I have zillions of zucchinis, once again. (heavy sigh) So what do you do when the world gives you zucchini? Get creative with zucchini dishes.

I do appreciate the generous spirit of zucchini, it challenges us to get out of the “zucchini bread” box and try some new recipes. A friend whom was recently traveling in Egypt inspired me to try a different recipe called “kousa mahshi” or stuffed zucchini. Now most everyone has tried zucchini boats at one time or the other and this is a lovely ethnic rendition of them.

In the Middle Eastern world, the popular stuffing of vegetables has it deep roots in the cookery of the early Islamic empire. This practice was probably learned from the Persians but the Greek also lay claim to it. Stuffed vegetables like “kousa mahshi” are a dish that graces the tables of families at Sunday dinners. They are also a frequent addition to special gatherings like weddings, where they are prepared communally.

This is not a difficult recipe, just one that takes some time, due to the stuffing of the zucchini. I almost cheated and sliced the zucchini in half and baked them, but then I thought, “These lovely zucchini grew in my garden at the pace of nature and now I am making them into an ancient dish. Why rush?” Take this opportunity to slow down and enjoy the beauty of something created from garden to table. This is a meal that is as much about process as the final plate. 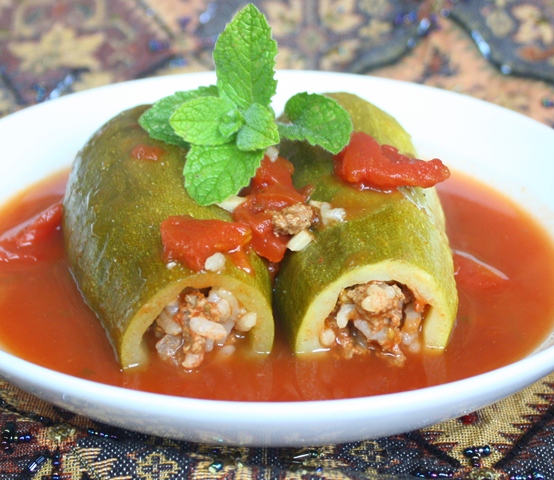 Kousa Mahshi
This dish can easily be made completely paleo by replacing the rice with one cup of pinenuts.  This is a wonderful fall dish as the chill begins to creep into the garden.

Sauce
4 cups of a low sodium broth, (I used chicken)
Or water
1 15 oz can of tomato sauce, low salt
1 14.5 can of low salt, crushed tomatoes, don’t drain
2-5 cloves of garlic minced
1 tablespoon of minced fresh mint
Or 2 teaspoons of dried mint
1 teaspoon of cumin
The juice of a lemon
Salt to taste
Hot sauce to taste (optional)

Might as well start with the hard part and core those zucchini. I used a long skinny knife to cut off the stems then gently bore out a core in the middle of them. A long handled ice tea spoon seemed to work best to core them out. Just keep coring them out, like carving a pumpkin till you have the walls to about 1/4 inch thick. Be careful not to poke a hole in them if possible. If you have an apple corer use that. I guess Middle Eastern cooks have a special tool they use that makes it real easy. Use the pulp however you want. I gave it to the chickens.

Get out a nice deep bowl and mix together all the stuffing ingredients till well blended. (I used my hands for this.) Gently stuff the zucchini with the mixture using your fingers. Don’t overstuff them! Leave room for the rice to expand. Set them aside for now, to await their grand moment.

In a large, heavy bottomed pot, combine the sauce ingredients and bring to a boil, while stirring. Then lower the heat and simmer for a few minutes to let the flavors marry. Very carefully float the stuffed zucchini in the broth and simmer, covered, for about 45-50 minutes till the rice and meat is done.

Check occasionally during cooking and if the sauce needs more broth or water, add it. Serve in deep bowls, in some of the hot broth with minced fresh mint and parsley sprinkled on top. Serve with fresh vegetables such as carrot and celery sticks and hummus. Sahtayn! Which is Arabic for “bon appétit,” which translates literally as “two healths to you.”

Hunt for what you need

I was very surprised that I love this way of eating. So this is a huge departure for me and to love it on top of that! Read More…